When I decided i wanted to learn to cook something other than meat loaf and mashed potatoes, i happened across Laurie Colwin's columns in Gourmet magazine. Here was someone "real" writing passionately and humorously about food and life. i immediately went to the library and scoured past issues of the magazine for all of her previous columns.

i loved her column because it was like reading the letter from a best friend who knows how to satisfy a person's hunger. i wanted to be in the kitchen with her. Just being herself in words, she captured my imagination, made me laugh, taught me what cooking and eating was all about. 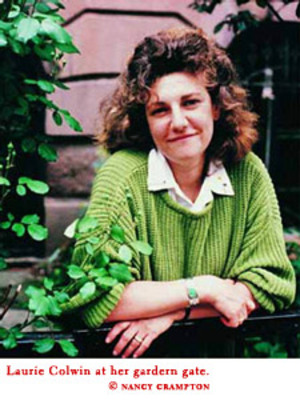 i am not over stating things when i say that finding Laurie changed my life.

Laurie left far too soon. And those of us who devoured her columns treasure our copies of her two cookbooks. Michelle Auerbach Brode says it better than i can:

"Everyone I know and everyone who reviews Laurie Colwin's food books says the same two things. The first is that her books live on our bedside tables. The second is that we read her over and over, especially when depressed. What does this say about Laurie Colwin? That she is one of the best friends I have ever met in a book. She makes life feel appealing, warm, intimate, real, and brave. And that is just her food writing, not even her novels.

She is the friend who at a party hears that there is good food description in Anna Karenina. She borrows it from the host of the party, gets in a cab, leaves the party and goes home to read it. How could you not want this woman on your nightstand. She is so human. I would want her number programmed into my phone.

I have always thought that question "If you could invite three literary figures to dinner..." was silly. I really wish I could invite Laurie Colwin to dinner. I miss her. I think about her. She takes up a big space in the part of my brain that stores examples of how to live."

Laurie's tomato pie is one of my all time favorite recipes came from her book, More Home Cooking.
i make her tomato pie at least six or eight times every summer. Laurie wrote all of her recipes in narrative form...so that's how i present it here (and a translated version following). Yes, it's absolutely worth it to turn on the oven in the middle of August for this scrumptious pie.

I have never yet encountered tomatoes in any form unloved by me. Often at night I find myself ruminating about two previously mysterious tomato dishes, which I was brazen enough to get the recipes for. One is Tomato Pie and is a staple of a tea shop call Chaiwalla, owned by Mary O'Brien, in Salisbury, Connecticut. According to Mary, the original recipe was found in a cookbook put out by the nearby Hotchkiss School, but she has changed it sufficiently to claim it as her own. The pie has a double biscuit-dough crust, made by blending 2 cups flour, 1 stick butter, 4 teaspoons baking powder, and approximately 3/4 cup milk, either by hand or in a food processor. You roll out half the dough on a floured surface and line a 9-inch pie plate with it. Then you add the tomatoes. Mary makes this pie year round and uses first-quality canned tomatoes, but at this time of year 2 pounds peeled fresh tomatoes are fine, too. Drain well and slice thin two 28-ounce can plum tomatoes, then lay the slices over the crust and scatter them with chopped basil, chives, or scallions, depending on their availability and your mood. Grate 1-1/2 cups sharp Cheddar and sprinkle 1 cup of it on top of the tomatoes. Then over this drizzle 1/3 cup mayonnaise that has been thinned with 2 tablespoons lemon juice, and top everything with the rest of the grated Cheddar. Roll out the remaining dough, fit it over the filling, and pinch the edges of the dough together to seal them. Cut several steam vents in the top crust and bake the pie at 400 degrees for about 25 minutes. The secret of this pie, according to Mary, is to reheat it before serving, which among other things ensures that the cheese is soft and gooey. She usually bakes it early in the morning , then reheats it in the evening in a 350 degree oven until it is hot.

It is hard to describe how delicious this is, especially on a hot day with a glass of magnificent iced tea in a beautiful setting, but it would doubtless be just as scrumptious on a cold day in your warm kitchen with a cup of coffee."

After making Laurie's pie a dozen or more times, i wrote it up in typical cookbook fashion (with a couple of my notes/additions) to pass along to friends. i eat this as soon as it has cooled off enough to slice...and i like it even at room temperature a couple of hours later when i'm feeling a bit peckish again.

In a bowl mix flour and baking powder together. Cut butter into flour with a pastry blender until it resembles coarse oatmeal. Stir in milk a little at a time until dough forms a ball. Knead gently only until dough is completely blended. Roll out half the dough on a floured surface and line a 9-inch pie plate with it.

In a small bowl, mix mayonnaise with lemon juice. Blanch the tomatoes in a large pot of boiling water for 20-30 seconds and transfer immediately to a sink full of cool water. Peel and slice very thin. Cover
the bottom of the crust with two layers of tomato slices. Sprinkle 1/3 of the herbs across tomatoes. Add another layer of tomato slices, sprinkle with 1/3 of the herbs and 1/2 the grated Cheddar. Drizzle with 1/2 of the mayonnaise mixture. Layer the rest of the tomato slices on top and scatter remaining herbs over the last layer. Top with remaining Cheddar and mayonnaise mixture.

Roll out the remaining dough, fit it over the filling, pinch the edges of the dough together to seal them. Cut several steam holes in the top crust and bake the pie at 400 degrees for about 25 minutes, or until crust is golden and filling is just bubbling.