Corn On and Off the Cob

If forced to
i could give up my microwave oven without too much of a fight
except in late July and August
in other words
when the worst heat and humidity envelope us
and fresh corn appears at every farm stand and farmer's market. 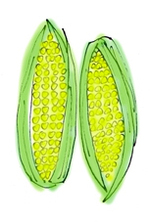 i believe everyone must know by now
that the absolute best way to cook corn on the cob
is in the microwave
1-2 minutes and you're eating perfectly cooked corn
without filling the house with clouds of steam from
a pot full of boiling water.

Sweet corn is
in my opinion
one of Mother Nature's most appreciated apologies
for all of the storms, floods, droughts and other
lousy weather heaped upon us thru the year.

But i enjoy corn off the cob almost as much
particularly when it is fried up in delectable little fritters for breakfast.

This recipe (adapted just slightly from one found in Martha Stewart Living Magazine)
is super simple and quick. Make it a couple of times
and you'll know it by heart
and will be eating it nearly every Sunday morning through corn season.

The only slightly “tricky” part is removing the corn kernels from the cob.
My preferred method for doing this:
spread a clean tea towel on the counter
hold a shucked ear of corn upright with the large end of the corn cob
resting on the towel while i slice off the kernels with a strong, sharp knife.
The towel keeps the cob from slipping dangerously
and keeps most of the kernels from bouncing all over the kitchen.
No, i've never tried any special tools invented for this purpose
(my kitchen drawers are plenty full already, thank you very much)
Yes, i've tried cutting the ears inside a large bowl (as Martha suggested)
but find it next to impossible to use a good sized knife
inside even my largest mixing bowl. 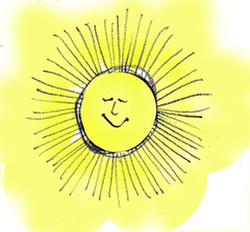 This recipe makes twelve to fourteen 2-inch fritters. A perfect breakfast for 2 adults.

Place the corn kernels in a mixing bowl. Add one egg yolk (reserve one yolk for another use—such as scrambled eggs or an omelet for supper or tomorrow's breakfast...no, i'm not afraid of fat) flour, salt and pepper. Stir to combine.

In a clean, medium-size mixing bowl, whisk both egg whites until stiff but not dry. Fold into the corn mixture.

Heat 2 tablespoons of vegetable oil in a large frying pan.

Drop spoonfuls of batter—about 2 inches in diameter—into the oil, spaced a few inches apart. Cook until golden, 1-2 minutes. Turn and cook the other side until golden. Remove and drain on a paper towel--or a clean, old flour sack towel or cheese cloth. (i haven't yet figured out which is more environmentally sound: using fewer paper towels for draining cooked foods, or laundering fewer kitchen towels...what do you think?)

Serve immediately. i like these with several large slices of tomato on the side.

Posted at 08:28 AM in breakfast, comfort food, corn, From the Farmer's Market | Permalink | Comments (4)