« in which i build lunch | Main | My second favorite way to eat corn as long as the local harvest lasts. »

This first appeared as my column in the New Jersey Herald on Sunday, August 6, 2017

Like most everyone else, I have been waiting impatiently for local corn to appear at the farmers market and road stands. After satisfying my hunger for fresh corn on the cob with nothing but butter and a bit of salt, I decided it’s time to expand my corn repertoire and try something new. Last weekend’s cooler weather made me go hunting for a soup recipe and Deborah Madison’s Curried Coconut Corn Soup with Yogurt and Lime sounded perfect: I love corn, coconut milk, and lime. And the recipe was not too fussy—once I procured all the spices, including garam masala, called for in her recipe. 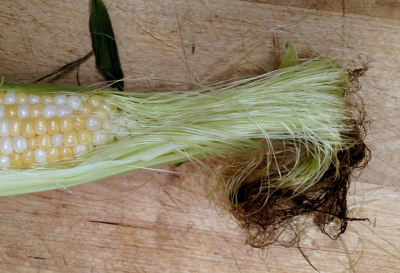 I do not cook many Asian or Indian dishes, so garam masala was new to me. According to The Food Lovers Companion, it is a blend of ground spices used in Pakistan, India and other south Asian cuisines. Home cooks in these lands will often create their own blend which can include a mix of the following as well as other local spices: peppercorns, cloves, cinnamon, mace (the outer webbing found on nutmegs), cardamom, bay leaf, cumin, star anise, fennel, chili. Uncertain of this new-to-me blend, I was immediately captivated with the warm fragrance when I opened the self-service, bulk container of garam masala at the Sussex County Food Co-Op in Newton.

I will admit to being just a bit skeptical of using so many spices with fresh corn, worried that they would overwhelm the delicate flavor of the broth. I was still worried when, after adding coconut milk and broth, the dark spices gave the mixture a brown, not so appetizing color. After whisking the soup for a just a minute or two, the small clumps of coconut milk finally blended thoroughly and the color settled into a warm golden, decidedly delicious looking hue.
Ms. Madison recommends stirring in the juice from one lime just before serving, but after tasting—and loving-- the soup after it had simmered a bit, I hesitated. After all, one lime may produce 2 tablespoons of juice while another may produce twice as much. So, I waited until I sampled a small portion with a dash of lime juice and decided just one scant tablespoon of juice is all it needed for the entire pot.

It was hot again by the time I made this soup, so I served it at room temperature and enjoyed the cold leftovers later, straight out of the fridge.

Heat 6 cups water in a saucepan. Meanwhile, slice the corn kernels off the cobs. The easiest way to accomplish this without the kernels bouncing all over your kitchen is to place a tea towel on a counter and holding each corn ear by the narrow tip with the flat stalk end set firmly in the middle of the towel. Carefully cut away the kernels without slicing into the cob.

Break the cobs and put them in the heating water with the cilantro stems and any onion trimmings. Simmer for at least 15 minutes—longer if you can—then strain.

Melt the butter in a soup pot over medium heat. Add the onion, cook for 3-4 minutes, then add all the spices and cook for a few minutes more. Stir in the flour, pour in the coconut milk, and add the corn kernels, chopped cilantro, 1.5 cups of the corn broth, and three-quarter teaspoon salt. If the soup is too thick, thin it with more stock or water.

Simmer over medium heat for 10 minutes. Adjust seasonings if needed.

Ms. Madison recommends adding the juice of one lime at this point. I suggest you do a taste test first:
Ladle about one-half cup of soup into a dish, mix in a little lime juice at a time and taste the blend to determine just how much lime you wish to add to the pot. In the end, I preferred the flavor with just one tablespoon of lime juice added to the entire recipe.

Whip the yogurt with a fork until smooth. Serve the soup hot, cold or at room temperature with a swirl of yogurt and a sprig of cilantro.

*Did you know ripe limes are yellow, not green? I always look for limes with yellow spot and let them ripen at home before using. A ripe lime, and those with a large yellow side, will yield more juice than a hard, dark green lime.