It was my big sister who first introduced me to
Royal Riviera Pears, the juciest, tastiest comice pears on the planet.
Every Christmas, she sends us a box of them
and we devour them, one by one
as they ripen. 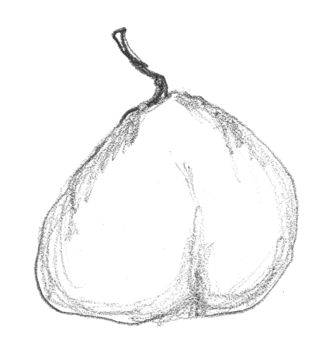 Most of them are simply cut in half
place in a bowl
(to preserve every drop of scrumptiousness
as well as to avoid soaking a sleeve
if not an entire sweater or blouse
with pear juice)
and eaten with a spoon.

One or two of these precious fruits will be saved
and baked into a fablously simple
gloriously comforting (if decadent) clafoutis--minus the cherries.

Not that i don't like cherries
i do
i just never have any around at the same time.

i assume the dish is delicious when using other pears, too
such as an Anjou
since that's what Martha uses
All i can testify to
is that it is pure heaven with a Comice from the
orchards of Oregon.

The following recipe was lifted from Martha
with the addition of a dusting of cinnamon over the top after
the custard comes out of the oven.
i have fallen in love with Chinese and Vietnamese cinnamons
but the "regular" stuff will be very tasty, too.

If you don't devour it all tonight
it will be just as lovely tomorrow morning, with a cup of tea.

Guide to measurements: BLACK Cups/sticks, BLUE metric
i sincerely hope my conversions are accurate
but i have the least trustworthy brain when it comes to
dividing and fractions, etc...so perhaps you should double check
this is the chart i used

Blend milk, cream, eggs, vanilla, sugar, flour, and salt in a blender until smooth, about 1 minute.
Pour batter over pear.

Bake until golden and set, about 25 minutes.
Let stand 15 minutes.

Dust with cinnamon (Chinese or Vietnamese are my favorites)

Cut into wedges and serve.

Clafoutis! I have been meaning to try to make one for so long (we have an excellent cherry tree in the village). Thankyou SO much for joining in and for this recipe. I can hardly wait to try it out x

We had some of those pears, but they are gone, without having been fancied up like this--sounds delicious.