Is this the Best Pumpkin pie...ever?

A few weeks ago, Robin's yummy and tempting post
had me yearning...
which inspired me to make my favorite apple pie.
Then, because it is the season
i got to thinking about Jo's pumpkin pie.
It's a recipe she tweaked, using homemade puree from
one of those "milk", or "cheese" pumpkins instead of the canned stuff.
It is my favorite, bar none. (That's her, holding one). 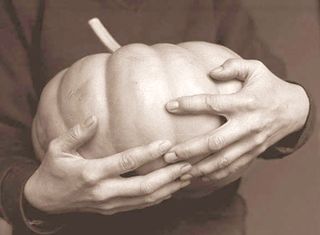 Not every pumpkin makes good eating, and the majority of pumpkins sold this time of year are meant for jack-o-lanterns
not pie, soup or side dishes.
The flesh of this sort is usually dry and very stringy
in other words, unpleasant.
When asking for pie pumpkins at farm stands you will probably be handed “Small sugar”
a medium sized, traditional looking orange pumpkin that has been grown in gardens and farms since the Civil War. “Small sugar” will grow to be only eight to ten inches in diameter and tops out around eight pounds, but usually smaller. Sometimes the skin of this pumpkin is covered with tiny, pale freckles whereas those not suitable for cooking have a “clearer skin”.
However, this is not a reliable indicator that a pumpkin is a “sugar” pumpkin. The folks at the farm stand should know which are which and may have other varieties of “pie pumpkins” as well.

In recent years, white pumpkins have become increasingly popular around here.
“Lumina” was the first i remember seeing on the market.
This medium-size pumpkin has a cool, silvery-white skin that glows in 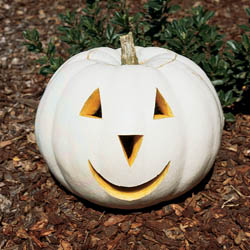 the twilight.
Inside, the flesh is the familiar brilliant orange.
For my palate this one cooks up into the perfect balance of sweet and savory, slightly dry but still moist–excellent for making pumpkin pie from scratch or using in stews and soups.

The milk pumpkin has a warm, if pale tan skin
and flattened shape that will make you wonder,
“Is this really a pumpkin?”
In many seed catalogs it is labeled “Long Island cheese pumpkin” since it is usually perfectly round and flat, almost like a big wheel of cheese.
It is so naturally sweet that i don’t care for eating it plain as a squash side dish, but
it makes an absolutely wonderful pie.

It used to be difficult to find.
Only the "old guys" at the long established family nurseries
and farm stands knew this wonderful pumpkin.
Obviously, the population at large
has discovered just how delectable it is,
because we now find it nearly everywhere--including the supermarket.

Does it make the best pumpkin pie...ever?
No one will agree to that, of course.
Not even Jo...
But it is definitely a contender.

It could not be easier to prepare fresh pumpkin for pie.
Simply cut the pumpkin into chunks and bake it in a 350 degree oven
(steaming will add too much moisture)
until the flesh is tender all the way through to the skin.
After it cools, remove the skin and puree the flesh in a blender or
food processor until completely smooth.
Let it stand to “relax” for at least thirty minutes before using in a recipe.
One small pumpkin will produce oodles of pumpkin puree—enough to make
half a dozen pies or more.
The puree freezes beautifully, by the way.

Milk, or cheese pumpkin produces a silky, almost “chiffon-like" pie.
The natural sweetness and mild flavor of this squash requires
less added sugar and fewer spices than my standard family recipe
which is based on commercially canned pumpkin.

When experimenting with other types of fresh pumpkin it
would pay to bake small portions of the custard filling,
adjusting the sugar, salt and spices to your taste.

And by all means, go the extra mile and make your own pastry for the crust!

Jo's Pumpkin Pie with Orange Cream Topping
Do try the orange zest in the cream topping...a revelation when i was
first served the pie with it

Prepare pie crust.
Preheat the oven to 425 degrees. Mix all of the pie filling ingredients together in a bowl until well blended. Pour into unbaked pastry shell. Bake for 15 minutes. Reduce the heat to 350 degrees and bake for approximately 35 minutes longer, or until set in the center of the pie. Cool before cutting.

Whip the heavy cream, sweetening with a little honey, to taste, and a few drops of vanilla. Gently stir in the zest from one orange. Serve each slice of pie with a dollop–or more– of cream on top.

For my palate this one cooks up into the perfect balance of sweet and savory, slightly dry but still moist–excellent for making pumpkin pie from scratch or using in stews and soups.